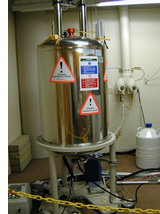 The console of Kerry is equipped with 3 RF channels, 4 amplifiers, and the capability generate 3-axis gradients of arbitrary shape. Each RF channel is capable of generating hard and shaped pulses over any nucleus. The four amplifiers consist of two linear amps covering the x-nucleus frequencies up to phosphorus, one for hydrogen and one for deuterium. With its BBFO (broadband/19F observe, 1H decouple), this machine can routinely handle users’ needs for 1H and hetero-atom from 15N to 31P or 19F NMR. In addition, the console has two receivers which can be configured for simultaneous acquisition of 1H and 13C spectra among other combinations.

The controlling computer is an HP desktop computer running RedHat Linux. The Bruker software, TopSpin, should be capable of executing any desired multi-dimensional experiment, with the only limits being the type of nuclei observed.

Kerry is also equipped with an automated sample changer that can accommodate boxes of 96 samples in 5 mm or 1 mm tubes, or up to 46 individual samples in spinners on the outer ring. It is still possible to load samples in manual mode, however, this procedure requires users to be first trained and approved by NMRFAM staff.

All of the probes on Kerry have deuterium lock channels.

There are also the following, older probes available:

Kerry can also use Devon’s probes, but this will only be done if absolutely necessary.

The base rate for time on this machine is $6.00/hour for publishable work or $200/hour for proprietary work.